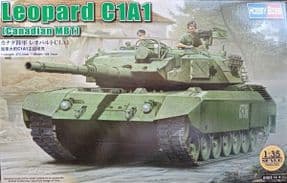 The Leopard 1 entered service in 1965 and was Germany's (West) first domestically designed and produced tank since WW2. It was reasoned that conventional armour would not be able to stop the new HEAT guided missiles coming into service, so the armour was light and mobility emphasised. It was armed with the British L7 105mm gun, so had decent firepower for the time.

It proved a popular tank and was exported to many NATO armies and the tank has been progressively upgraded and is still in service today. The Canadian Leopard C1A1 the Canadian equivalent of the Leopard 1A3 and entered service with the Canadian army in 1978-9. Several C1A1's had refits, which included the MEXAS applique armour upgrade and saw service in Kosovo in 1999 (KFOR).

This is a highly detailed plastic kit with photo etch metal parts. The tracks are made up of individual one piece links and the kit has decals for 1 tank.