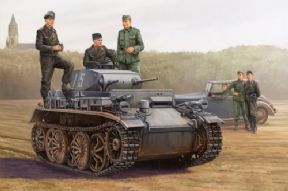 OUT OF STOCK
WAS: £26.99
OUR PRICE:£24.18
Sorry, this item is out of stock.
If you would like to order it, please email us with the product details above this message and the number you want. We will get back to you with a current price, shipping cost and likely delivery date.
Please also let us know if you´re outside the UK so we use the correct postage rates.

The original Panzer 1 A was a small 2 man light tank armed with twin machine guns, primarily for crew training. Two combat versions were developed as the Panzer 1 C and Panzer 1 F. The Panzer 1 C was a light tank with 20mm cannon for use in the reconnaissance role. While the Panzer 1 F was designed as an infantry support tank with twin machine guns and heavy armour. Both features new suspension and more powerful engines.
A total of 40 (+6 prototypes) Panzer I Ausf C's were produced. Two of them were sent to the 1st Panzer Division while the rest were deployed to the Panzer reserves in Northern France and saw action in Normandy
SOME OTHER PRODUCTS YOU MAY LIKE