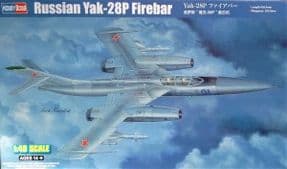 IN STOCK
WAS: £47.99
OUR PRICE:£33.60
The Yak-28 was a Russian multi role twin engine aircraft in service from 1960-92. Originally built as a bomber, it was modified for many different roles. The Yak-28P was a long range interceptor. The internal weapons bay was used to carry extra fuel and it was fitted with an interception radar, plus medium range air to air missiles.
Hobby Boss are a relatively new company to us in Western Europe. They are from China and are connected with Trumpeter. Hobby Boss are known for producing well engineered kits with a good level of detail.

This particular kit looks very well detailed and there are markings for 1 Russian aircraft.
Write an online review and share your thoughts with other shoppers!