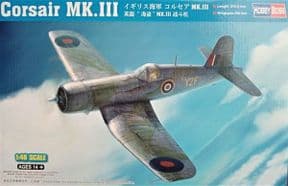 OUT OF STOCK
WAS: £26.99
OUR PRICE:£16.98
Sorry, this item is out of stock.
If you would like to order it, please email us with the product details above this message and the number you want. We will get back to you with a current price, shipping cost and likely delivery date.
Please also let us know if you´re outside the UK so we use the correct postage rates.

The Vought F4U Corsair first flew in 1940 and was designed from the start to be very fast. It was built around the most powerful available engine, the 2000hp, R2800 Double Wasp. This was coupled to a large propeller, so big that the wings had to be cranked to keep the landing legs from being too long, so the propeller didn't hit the ground. The Corsair entered production in 1942 but was initially rejected by the US Navy for being too dangerous to land on Aircraft Carriers, so it was instead given to a very grateful US Marine Corps, who now finally had a top class fighter.

The Corsair went on to be an excellent fighter and fighter-bomber and was eventually accepted by the US Navy and used on its Aircraft Carriers. The Royal Navy also used Corsairs and had no hesitation about using them on Aircraft Carriers and quickly developed measures to make carrier landings a lot safer. The Corsair was retained in service in favour of the Hellcat due to its higher performance and was still in service during the Korean War.  The Mk.III was the same as the Mk.II but built by Brewster.

Hobby Boss are a relatively new company to us in Western Europe. They are from China and are connected with Trumpeter. Hobby Boss are known for producing well engineered kits with a good level of detail. This particular kit features a highly detailed engine, interior, machine gun bays and wing folds. It looks like the kit allows you to model the wings folded as well as unfolded, an advantage over other 1/48 Corsair models! Plus this is the first mainstream plastic kit of a Corsair with clipped wings, as used on Royal Navy Aircraft Carriers. The kit comes with decals for 2 Royal Navy Corsairs.
Write an online review and share your thoughts with other shoppers!