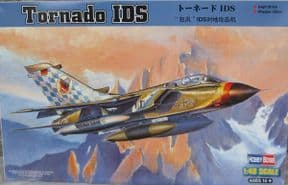 OUT OF STOCK
WAS: £42.99
OUR PRICE:£38.22
Sorry, this item is out of stock.
If you would like to order it, please email us with the product details above this message and the number you want. We will get back to you with a current price, shipping cost and likely delivery date.
Please also let us know if you´re outside the UK so we use the correct postage rates.

The Panavia Tornado was the result of a combined effort from Aerospace companies from the UK, Germany and Italy, who had broadly similar requirements. The Tornado was designed primarily as a twin engined, 2 seat, low level interdictor and strike aircraft. It uses Variable Geometry wings (swing wings) and has a large and varied payload. It was first operational in 1979 and is still in service today. It has also been developed as an interceptor and electronics warfare aircraft, proving its versatility.
The IDS (strike version) is in service with the RAF (now the GR4), the Luftwaffe and Marineflieger, the Italian and Royal Saudi Air Forces. The ECR version has been used by the Luftwaffe and Italian Air Forces, whilst the Interceptor has been used by the RAF, Italian and Royal Saudi Air Force.
The Strike version has proved to be one of the most capable low level attackers in the world and RAF Tornados saw extensive use in both Gulf Wars, flying missions no other aircraft could perform as well.

Hobby Boss are a relatively new company to us in Western Europe. They are from China and are connected with Trumpeter. Hobby Boss are known for producing well engineered kits with a good level of detail.

There are markings for 1 RAF Tornado GR1 and 1 Luftwaffe Tornado IDS.
Write an online review and share your thoughts with other shoppers!