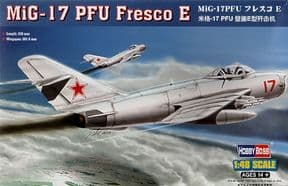 IN STOCK
WAS: £20.99
OUR PRICE:£14.52
The MiG-17 was the follow on from the MiG-15 and featured a redesigned wing which could cope better with the higher speeds approaching Mach 1. Some later models were fitted with an afterburner, pushing the speed to over 700mph and increasing the climb rate. Some like this MiG-17PFU featured a radar for use with early air to air missiles and in the case of the MiG-17PFU the cannons were deleted.

This MiG-17PFU model falls into the latter category and looking at the contents of the box I think a nice looking model can be made from this kit which comes with 4 air to air missiles.
There are markings for 3 different Russian planes.
Write an online review and share your thoughts with other shoppers! 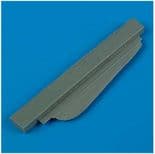