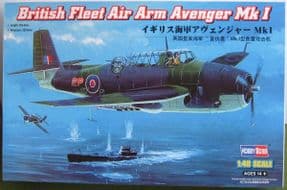 OUT OF STOCK
WAS: £29.99
OUR PRICE:£27.00
Sorry, this item is out of stock.
If you would like to order it, please email us with the product details above this message and the number you want. We will get back to you with a current price, shipping cost and likely delivery date.
Please also let us know if you´re outside the UK so we use the correct postage rates.

The Grumman Avenger was designed to replace the earlier and obsolete Douglas Devastator torpedo bomber for the US Navy. It was powered by a Wright Cyclone radial engine of 1850HP and had a crew of 3. It featured an internal weapons bay which could hold a torpedo and various bombs. It also had 2 12.7mm machine guns in the wings, a 12.7mm machine in the rear turret and a 7.7mm machine in the ventral position. The Avenger first saw action at the Battle of Midway when 6 planes flying from Midway Island attacked the Japanese Carrier fleet. The attack was unsuccessful and almost all the Avengers were shot down by Japanese fighters.

Despite this initial setback the Avenger replaced the Devastator in the US Navy and went on to have a highly successful career. The Fleet Air Arm was keen to have a modern torpedo bomber to replace the Swordfish and Albacore and ordered the Avenger as well. The Avenger first saw action in Fleet Air Arm service actually based aboard USS Saratoga in the early part of 1943 and were brought back to the UK aboard HMS Victorious. At the same time the Fairey Barracuda torpedo-dive bomber was entering service and it was decided to use the Barracuda on European based Aircraft Carriers and to send the Avenger squadrons to the Far East.

Avengers were based on the carriers HMS Indefatigable, Victorious, Illustrious, Indomitable and Formidable. Along with FAA Corsair and Firefly fighter bombers, the Avengers attacked many Japanese targets with rockets and bombs and Avengers from No 848 Sqd from HMS Formidable were the first British planes to attack targets on Japanese home soil.

Despite the Far East being the Avengers main area of operations some were based in the UK and used for mine laying and anti-submarine patrols. They also flew anti-shipping strikes during the build up to D-day. A handful of squadrons were based on Escort carriers and helped escort convoys to Russia. The Avenger remained in service with the Fleet Air Arm until the mid 50's by which time it was a dedicated anti-submarine plane.

Hobby Boss are a relatively new company to us in Western Europe. They are from China and are connected with Trumpeter. Hobby Boss are known for producing simple, well engineered kits with a good level of detail. This particular kit looks very well detailed. The interior looks to be very well done as is the bomb bay and engine. The kit features many ordnance options, including 2 different sizes of bombs (2 * 500lbs and 4 * 250lbs I think), a torpedo, a large fuel tank for the bomb bay, drop tanks and rockets. You can also model the bomb bay open or closed and the wings can be modelled as folded too. In short this looks like it will make an excellent model.