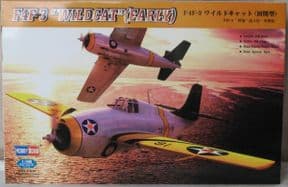 OUT OF STOCK
WAS: £14.99
OUR PRICE:£13.62
Sorry, this item is out of stock.
If you would like to order it, please email us with the product details above this message and the number you want. We will get back to you with a current price, shipping cost and likely delivery date.
Please also let us know if you´re outside the UK so we use the correct postage rates.

The Grumman F4F Wildcat was the US Navy's main carrier fighter during the early part of the war in the Pacific. It was well armed and rugged and reasonably agile and was able to take great punishment. Although outclassed in terms of speed, climb and agility by the Mitsubishi A6M Zero, Wildcat pilots were able to hold their own in combat thanks to tactics developed by the US Navy ace Commander 'Jimmy' Thatch. At the Battle of Midway in June 1942, the pilots used the 'Thatch Weave' successfully for the first time in combat. It then became the standard tactics used by the US Navy fighter pilots.
The Wildcat was replaced as the front line fighter in 1943 by the bigger and faster F6F Hellcat but is also used by the US Marines and from the small Escort Carriers, where it was used to attack U-boats and ground targets with its machine guns and bombs.

Hobby Boss are part of the Chinese model company, Trumpeter. Hobby Boss are known for their range of easy to build model kits for novice modellers but also for their range of nicely moulded and detailed, well engineered kits for a reasonable price. This Wildcat model falls into the latter category and a nice looking model can be made from this kit.

There are markings for 2 different pre-war planes one US Navy from USS Wasp and 1 US Marine Aircraft.
Write an online review and share your thoughts with other shoppers!