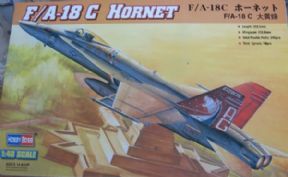 OUT OF STOCK
WAS: £36.99
OUR PRICE:£33.30
Sorry, this item is out of stock.
If you would like to order it, please email us with the product details above this message and the number you want. We will get back to you with a current price, shipping cost and likely delivery date.
Please also let us know if you´re outside the UK so we use the correct postage rates.

The F/A-18 Hornet was designed as a multi-role fighter for the US Navy, to replace the earlier A-4 Skyhawk, A-7 Corsair II and F-4 Phantom and to complement the then new F-14 Tomcat.  What emerged was an agile fighter that was equally capable of attacking surface targets and air to air combat. This meant it could assume the role of the USN's main strike fighter but had the flexibility to back up the F-14's in the air to air role.
The F/A-18 entered service in 1983. In both the single seat A variant and the 2 seat B variant, it began replacing F-4's and A-7's in USN and US Marine squadrons. The Hornet has also been an export success, with at least 7 other air forces operating it. It has also been continually upgraded with the later C/D models and eventually the E/F Super Hornet models.

The Hornet has seen action over Libya, in the First Gulf War, Bosnia, and the Second Gulf War. It proved capable of fending off enemy fighters, whilst still carrying its bomb load and then continuing to attack the assigned ground targets.
Hobby Boss are a relatively new company to us in Western Europe. They are from China and are connected with Trumpeter. Hobby Boss are known for producing well engineered kits with a good level of detail. This particular kit looks very well detailed and comes with a selection of ordnance, including AIM-7, AIM-9, AGM-84, AGM-88, GBU-10, JDAM, Mk 82 and Drop Tanks.

There are markings for 3 US Navy F/A-18C's, based on board USS Carl Vinson, including one with the 'Chippy Ho!' scheme and one's from the 'Blue Diamonds' and 'Wildcats' squadrons.
SOME OTHER PRODUCTS YOU MAY LIKE