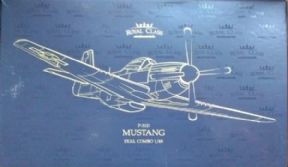 OUT OF STOCK
WAS: £64.99
OUR PRICE:£56.00
Sorry, this item is out of stock.
If you would like to order it, please email us with the product details above this message and the number you want. We will get back to you with a current price, shipping cost and likely delivery date.
Please also let us know if you´re outside the UK so we use the correct postage rates.

Please note this kit is too big for normal airmail!

Eduard are a Czech based manufacturer famed for the model accessories. They have in the last few years released a successful range of kits. This set is based an Eduard's recent all new Mustang kit and you can make two complete models. The set also contains the Canopy/Wheel masks and Etch from the Profipack edition, plus resin wheels and exhausts. Decals are provided for 14 different aircraft.