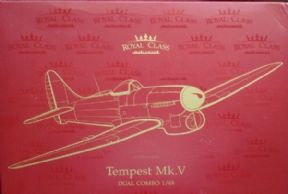 OUT OF STOCK
WAS: £84.20
OUR PRICE:£75.00
Sorry, this item is out of stock.
If you would like to order it, please email us with the product details above this message and the number you want. We will get back to you with a current price, shipping cost and likely delivery date.
Please also let us know if you´re outside the UK so we use the correct postage rates.

The Tempest was very succesful in service and excelled at low and medium levels and was probably the fastest piston engine fighter of WWII at lower altitudes. This coupled with it's fast acceleration + climb rate and heavy armament, made it the most feared allied fighter by pilots of the German Me262 jet fighter. Tempests also proved well able to intercept the V1 flying bomb and could also be equipped with bombs or rockets for ground attack missions. The Tempest was the RAF's favoured piston engine fighter post war until the early jet fighters were further developed and available in greater numbers.

Eduard are a Czech based manufacturer famed for the model accessories. They have in the last few years released a successful range of kits. This set is based an Eduard's recent all new Tempest kit and you can make two complete models. The set also contains the Canopy/Wheel masks and Etch from the Profipack edition, plus resin wheels and exhausts. Decals are provided for 14 different aircraft.