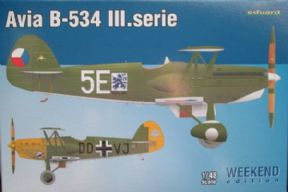 IN STOCK
WAS: £18.99
OUR PRICE:£12.00
The Avia B-354 was an agile bi-plane that first flew in 1935. At the time it was one of the best fighters in the world but it was soon outclassed by the likes of the Bf109, Hurricane and Spitfire. It was used during WW2 by the various Axis powers as a fighter and in other roles such as advanced trainer. It was also used against the Germans by the Bulgarians (after they changed sides) and during the Slovak uprising against the Germans. The German fighter pilots knew not to dogfight the more agile B-354.
Eduard are a Czech based manufacturer famed for their model accessories. They have in the last few years released a successful range of kits. The Weekend editions have the same plastic parts as the Profipack editions but without the extras, making it like any other kit. Decals are provided for two different aircraft.