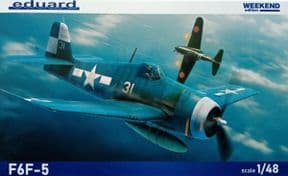 OUT OF STOCK
WAS: £18.20
OUR PRICE:£15.48
Sorry, this item is out of stock.
If you would like to order it, please email us with the product details above this message and the number you want. We will get back to you with a current price, shipping cost and likely delivery date.
Please also let us know if you´re outside the UK so we use the correct postage rates.

The Grumman Hellcat was built to replace the earlier Wildcat. It was bigger, more powerful, faster and could carry more weapons than the Wildcat. Combined with well-trained pilots, USN Hellcats won air superiority over Japanese held territory and shot down more Japanese aircraft than any other fighter. The Royal Navy, looking for better carrier planes, bought the Hellcat to replace earlier fighters and supplement newer British carrier fighters. In Fleet Air Arm hands, it also proved a success and was carried by many Royal Navy Aircraft Carriers.

The Hellcat was also developed into a night fighter with a radar pod on the starboard wing. Some Hellcat night fighters were up armed with a pair of 20mm cannons replacing 2 of the 12.7mm machine guns.

Eduard are a Czech based manufacturer famed for the model accessories. They have in the last few years released a successful range of kits. The weekend editions are the same as the Profipacks but without the etch and mask and less marking options. Eduard's 1/72 Hellcat kits are regarded as the best Hellcats in 1/72.

This version is the re-issued F6F-5 Hellcat, which is the same kit as before but with new decals for 4 different aircraft.