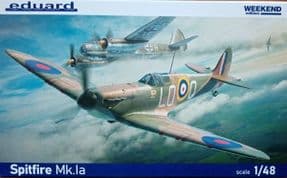 Eduard are a Czech based manufacturer famed for their model accessories but they have in the last few years released a successful range of kits. The Weekend editions contain the same plastic parts as the other Eduard kits but without the extras.

This kit has highly detailed and quite possibly the best ever Spitfire kit in 1/48, along with Eduard's earlier Spitfire kits. Decals are included for four different RAF aircraft.