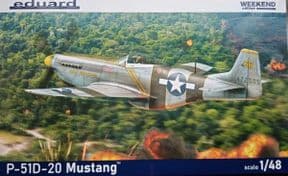 OUT OF STOCK
WAS: £15.60
OUR PRICE:£13.20
Sorry, this item is out of stock.
If you would like to order it, please email us with the product details above this message and the number you want. We will get back to you with a current price, shipping cost and likely delivery date.
Please also let us know if you´re outside the UK so we use the correct postage rates.

This is Eduard's excellent new tool Mustang Mk IV kit, which is highly detailed with engraved panel lines and comes with markings for four different USAAF Mustangs. This is now regarded as the best Mustang kit ever in 1/48.