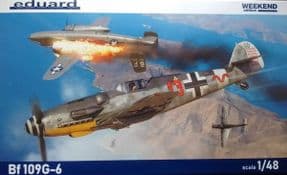 Please note that this is Eduard's new tool kit of the Bf109G-6 and it has the same plastic parts as the Profipack edition without the etch parts and mask. This kit contains decals for 4 Luftwaffe G-6 and G-6/Trop's.