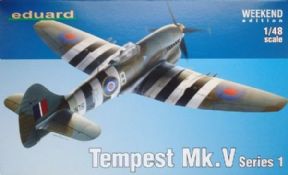 
Eduard are a Czech based manufacturer famed for their model accessories. They have in the last few years released a successful range of kits. The Weekend editions contain the same plastic kit parts as the Profipacks but without the extra mask and etch parts. There are markings for 2 RAF aircraft.