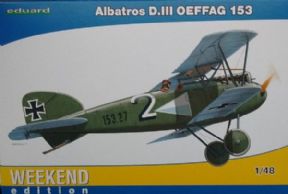 IN STOCK
WAS: £13.20
OUR PRICE:£9.00
The Albatros D.III entered service in December 1916 and quickly became popular with pilots because of its excellent manouverability and rate of climb. It was the main German fighter during what was known as 'Bloody April' in April 1917. It suffered some structural weaknesses but these were fixed and the type was still in service well into 1918.
The OEFFAG Albatros was the Austrian built version that used an Austro Daimler engine. These were faster than the German built ones but were hampered by being fitted with poor machine guns.


Eduard are a Czech based manufacturer famed for their model accessories. They have in the last few years released a successful range of kits. Their Weekend editions contain a kit with 1 marking options but with no extras.

There are markings for 1 Austro-Hungarian.