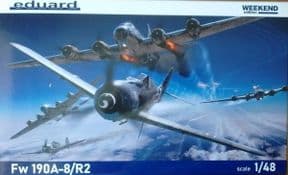 The Fw190 first went into service in the summer of 1941. It proved to be much better than the RAF's Spitfire Mk V and soon became known as the Butcher Bird. Early versions suffered from overheating problems, which weren't completely rectified until later models. The Jabo versions were fitted as fighter bombers and could carry 250kg or 500kg bombs under the fuselage. The A-8 became the standard heavily armed late war A series Fw190, armed with two 13mm machine guns and four 20mm cannons. It also could carry a wide variety of ordnance for different roles. The Fw190A-8/R2 was known as the Sturmbock and featured a lot of extra armour and had it's outer 20mm cannons replaced with 30mm cannons and was used as a specialist bomber destroyer.

Eduard are a Czech based manufacturer famed for the model accessories. They have in the last few years released a successful range of kits. The Weekend Editions contain the same plastic parts as the Profipack kits but without the mask and etch. This is an all new tool kit that isn't based on the previous Fw190A kits by Eduard. This kit is more conventional and doesn't have all the engine, nose MG interior compartments or wing root cannon compartments. This means it will be simpler and more enjoyable to build and better suited for most modellers. It is still a highly detailed model kit, to Eduard's usual high standards and comes with decals for 4 different aircraft.