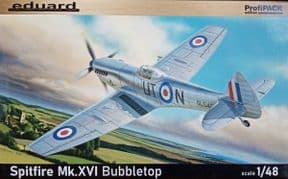 IN STOCK
WAS: £29.40
OUR PRICE:£20.94
The Spitfire Mk IX was made from a Mk Vc airframe and a Rolls Royce 60 Series Merlin engine with 2 stage supercharger. It was done to provide a temporary counter to the German Fw190, which was vastly superior to the Mk V Spitfires. However, the conversion was a success straight away and it became the second most produce Spitfire mark after the Mk V. It was good enough to keep the definitive Merlin Spitfire, the Mk VIII, from being manufactured in huge numbers! There was also a similar Spitfire, the Mk XVI, which was powered by a Packard built Merlin engine. The Spitfire XVI's generally were similar to late build Mk IX's in that they were fitted with the larger tail and the 'E wing'. Most of them were deployed in the European Tactical air force as fighters and fighter-bombers. The Spitfire Mk IX and XVI were in front line service until the end of WW2 and some still served after the war despite the superior Griffon powered Spitfires and also the Hawker Tempest being in service.

This kit is highly detailed and quite possibly the best ever Spitfire kit in 1/48, there are markings for 5 different planes of 1945-50
Write an online review and share your thoughts with other shoppers!