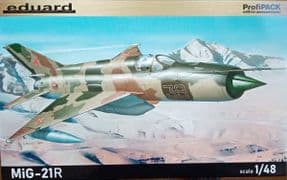 IN STOCK
WAS: £32.80
OUR PRICE:£27.90
The MiG-21(NATO code name Fishbed) is one of the most successful jet fighters ever made. It entered service in the late 1950's and was still being made in the 1980's and has been used by 50 different Air Forces in the world. Over 11000 were made and some are still in active service.  The MiG 21 is supersonic, some versions are capable of Mach 2. It can carry a wide range of bombs and rockets for ground attack and air to air missiles for the fighter role as well as an internal cannon.
The MiG-21R (Fishbed H)  is a second generation MiG-21, compared to the earlier MiG-21F-13, it features a more powerful engine, better avionics, the ability to use both radar guided and heat seeking missiles. The R model was a tactical reconnaissance version with dedicated camera pods but could still carry 2 air to air missile or a limited bombload. It was in production from 1966.
Eduard are a Czech based manufacturer famed for their model accessories. They have in the last few years released a successful range of kits. Their Profipacks contain a kit with several marking options, along with a Colour Zoom etch set, Canopy Mask and a full colour instruction booklet. This kit has highly detailed and features a good selection of ordnance.
There are markings for 5 different planes from the following Air Forces: Cuban, Czech, Polish, Russian and Yugoslavia.
Write an online review and share your thoughts with other shoppers!