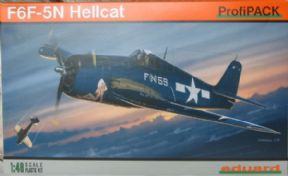 OUT OF STOCK
WAS: £29.99
OUR PRICE:£27.00
Sorry, this item is out of stock.
If you would like to order it, please email us with the product details above this message and the number you want. We will get back to you with a current price, shipping cost and likely delivery date.
Please also let us know if you´re outside the UK so we use the correct postage rates.

The Grumman Hellcat was built to replace the earlier Wildcat.
It was bigger, more powerful, faster and could carry more weapons than the Wildcat.
Combined with well trained pilots, USN Hellcats won air superiority over Japanese held territory and shot down more Japanese aircraft than any other fighter.
The Royal Navy, looking for better carrier planes, bought the Hellcat to replace earlier fighters and supplement newer British carrier fighters. In Fleet Air Arm hands it also proved a success and was carried by many Royal Navy Aircraft Carriers.
The Hellcat was also developed into a nightfighter with a radar pod on the starboard wing.
Some Hellcat nightfighters were uparmed with a pair of 20mm cannons replacing 2 of the 12.7mm machine guns.

Eduard are a Czech based manufacturer famed for the model accessories. They have in the last few years released a successful range of kits.

Their Profipacks contain a kit with several marking options, along with a Colour Zoom etch set, Canopy Mask and a full colour instruction booklet. In addition there are resin wheels, radar pod and 20mm cannon barrels. It is made from injection moulded plastic but is very complex with full engine and cockpit detail. In this kit you get an optional drop tank and bombs. This sort of kit would really suit an advanced modeller, especially those who want to show off their skills in modelling competitions.