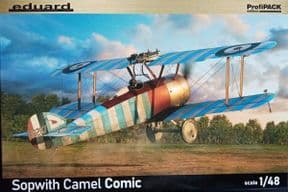 The Camel was powered by a single rotary engine and was armed with twin synchronized Vickers machine guns. Though difficult to handle, it was highly manoeuvrable in the hands of an experienced pilot, a vital attribute in the relatively low-speed, low-altitude dogfights of the era. In total, Camel pilots have been credited with downing 1,294 enemy aircraft, more than any other Allied fighter of the conflict. Towards the end of the First World War, the type also saw use as a ground-attack aircraft, partly because the capabilities of fighter aircraft on both sides had advanced rapidly and left the Camel somewhat outclassed. The 'Comic' was the Camel that was adapted to fight at night time.