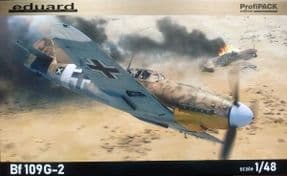 Please note that this is Eduard's (re-issue) new tool kit of the Bf109G-2 and contains Colour Zoom etch metal parts, Canopy/wheel mask, 5 different marking options, as well as the plastic parts. You can make a G-2/Trop and the G-2/R6 from this kit.