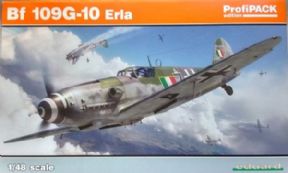 The Messerschmitt Bf109 is one of the most famous fighters in history. More Bf109's (over 33000) were built than any other fighter and it shot down many more opponents than any other fighter in history.The Bf109G was similar to the F but it introduced the DB605 inverted V-12 engine, which was more powerful than the earlier DB601, with more development potential. The main early versions were the G-2 and G-4, which had a 20mm cannon and two 7.92mm machine guns in the nose. The G-5 and G-6 had the machine guns replaced by 13mm heavy machine guns, which needed bulges on top of the cowling to accomodate the larger breech blocks. The Bf109G-10 was actually the final production version in the G series. It featured the DB605D-2 engine, as was fitted to the Bf109K series, making it the fastest Bf109G. The also had the streamlined engine cowling, Erla canopy and tall tail, plus many other small differences from the earlier G models.

The G-10 entered service in November 1944, the first ones produced were converted from G-14 airframes on the production line. It remained in production and service until the end of the war, with a small number of different versions.

Please note that this is Eduard's new tool kit of the Bf109G-10 and contains Colour Zoom etch metal parts, Canopy/wheel mask, 5 different marking options (including one for Hartmann), as well as the plastic parts.