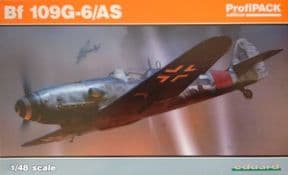 OUT OF STOCK
WAS: £29.40
OUR PRICE:£25.02
Sorry, this item is out of stock.
If you would like to order it, please email us with the product details above this message and the number you want. We will get back to you with a current price, shipping cost and likely delivery date.
Please also let us know if you´re outside the UK so we use the correct postage rates.

Please note that this is Eduard's new tool kit of the Bf109G-6/AS and contains Colour Zoom etch metal parts, Canopy/wheel mask, 5 different marking options, as well as the plastic parts.