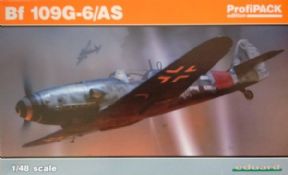 Please note that this is Eduard's new tool kit of the Bf109G-6/AS and contains Colour Zoom etch metal parts, Canopy/wheel mask, 5 different marking options, as well as the plastic parts.