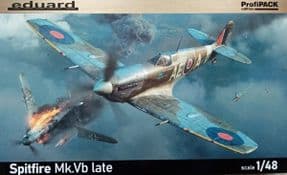 IN STOCK
WAS: £29.20
OUR PRICE:£24.84
First flown in 1936, the Supermarine Spitfire is the most legendary and famous fighter plane in history. It was a complex and high tech plane for the 1930’s and was difficult to produce in numbers at first. However when war arrived the production problems were eventually sorted and it was produced in greater number than any other allied fighter. Indeed it was the only Allied fighter in constant production in WW2.

It was also capable of development and this development kept it in line with the best fighters from other nations. The Spitfire rose to fame during the Battle of Britain. Despite the Hurricane being more numerous and shooting down more enemy planes, it was the Spitfire that captured the world’s imagination, something which it still does today. The Spitfire Mk II was similar to the Mk Ia but had a new Merlin engine of 1180hp, which gave a slightly increased performance. The Mk IIa entered service towards the end of the Battle of Britain and was the main version in service in late 1940 to early 1941. The Mk.IIb was armed with a pair of 20mm cannons and 4 machine guns. The Mk Vb was based on the Mk I/IIb airframe but with a new Merlin 40 series of 1475hp.

Eduard are a Czech based manufacturer famed for their model accessories but they have in the last few years released a successful range of kits. The Profipacks contain a kit with several marking options, along with a Colour Zoom etch set, Canopy Mask and a full colour instruction booklet. This kit has highly detailed and quite possibly the best ever Spitfire kit in 1/48, along with Eduard's earlier Spitfire kits. There are 6 options on the decal sheet.