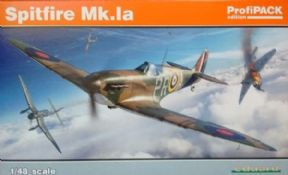 This kit has highly detailed and quite possibly the best ever Spitfire kit in 1/48, along with Eduard's earlier Spitfire kits. There are 7 options on the decal sheet, including several used in the Battle of Britain.