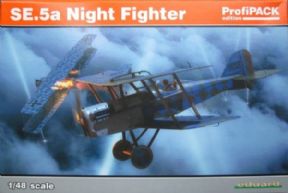 IN STOCK
WAS: £28.99
OUR PRICE:£19.00
The SE.5a was one of the best fighters in WW1. It was fast and agile but was also a stable aircraft, which aided aiming and firing its 2 machine guns. In entered service in 1917 but engine problems meant it wasn't available in great numbers until well into 1918. It was regarded as superior to the famous Sopwith Camel and was flown by the RFC's best air aces, Ball, McCudden and Mannock. Some were used as nightfighters and had a modified exhaust system.
This is Eduard's SE.5A 1/48 Profipack kit and it looks very nice. The kit comes with a set of colour photo etch parts, wheel mask and markings for 5 aircraft that used the Hispano Suiza engine. This nightfighter boxing also comes with resin parts to make up the modified exhausts.
SOME OTHER PRODUCTS YOU MAY LIKE