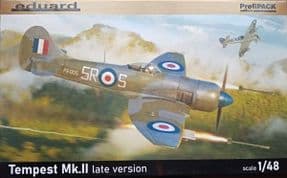 The Tempest was very successful in service and excelled at low and medium levels and was probably the fastest piston engine fighter of WWII at lower altitudes. This coupled with it's fast acceleration + climb rate and heavy armament, made it the most feared allied fighter by pilots of the German Me262 jet fighter. Tempests also proved well able to intercept the V1 flying bomb and could also be equipped with bombs or rockets for ground attack missions. The Tempest was the RAF's favoured piston engine fighter post war until the early jet fighters were further developed and available in greater numbers.

Eduard are a Czech based manufacturer famed for the model accessories. They have in the last few years released a successful range of kits. The Profipacks contain a kit with several marking options, along with a Colour Zoom etch set, Canopy Mask and a full colour instruction booklet.

This is an all new tool kit that isn't based on the previous Tempest kit by Eduard. This kit looks excellent, possibly one of the best 1/48 kits around and comes with decals for 6 different aircraft, including RAF and ones from India and Pakistan.