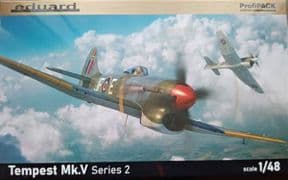 Eduard are a Czech based manufacturer famed for the model accessories. They have in the last few years released a successful range of kits. The Profipacks contain a kit with several marking options, along with a Colour Zoom etch set, Canopy Mask and a full colour instruction booklet. This is an all new tool kit that isn't based on the previous Tempest kit by Eduard. This kit looks excellent, possibly one of the best 1/48 kits around and comes with decals for 6 different aircraft.