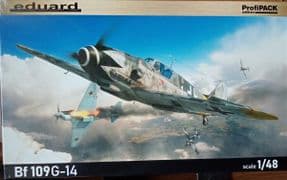 OUT OF STOCK
WAS: £26.60
OUR PRICE:£22.62
Sorry, this item is out of stock.
If you would like to order it, please email us with the product details above this message and the number you want. We will get back to you with a current price, shipping cost and likely delivery date.
Please also let us know if you´re outside the UK so we use the correct postage rates.

The G-5 and G-6 were essentially the same, the only difference being the G-5 had a pressurised cockpit for high altitude operations. The G-6 was the most common version of the G series of 109's and could be fitted with a varitey of external ordnance. On the centreline it could carry a bomb or drop tank and it was fairly common to see them with 20mm cannon pods or 21cm granaten werfers under each wing. This gave them heavier firepower for shooting down bombers at the expense of top speed and some agility. Despite being generally outclassed by Allied fighters, such as the Mustang, Tempest and Griffon Spitfires, the G-6 was in service until the end of the war and could still be a dangerous opponent when flown by an experienced pilot.
The G-14 was an attempt to rationalise and simplify the G-6 to maximise production, however in practice there were as many variations as the G-6!

Please note that this is Eduard's new tool kit of the Bf109G-14 and contains Colour Zoom etch metal parts, Canopy/wheel mask, 5 different marking options, as well as the plastic parts. One of the marking options is for a Bf109 flown by the legendry Erich Hartmann, the highest scoring air ace of all time.