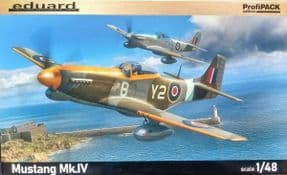 This is Eduard's excellent new tool Mustang Mk IV kit, which is highly detailed with engraved panel lines and comes with markings for six different RAF Mustangs, plus the usual Photo etch metal parts and canopy/wheel mask. This is now regarded as the best Mustang kit ever in 1/48. 8.