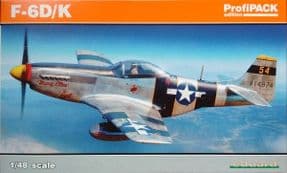 The early Merlin powered Mustangs the P-51B and C had a heavy framed canopy and a 'high back' rear fuselage. This did not give the best all round vision for the pilot and a new version was designed with a cut down rear fuselage and 'bubble canopy'. This became the most produced version, the P-51D. The P-51 was able to escort the US heavy bombers all the way to the furthest targets in Germany and back. It was because of this the Luftwaffe could no longer effectively defend Germany against bomber raids. Mustangs were also used to escort the B-29's over Japan in much the same way. After WW2 they saw use in the Korean War but they were relegated to the ground attack role as they were no match for the MiG-15 jet fighter. The F-6 model was a photo-recce version with cameras mounted in the rear fuselage

This is Eduard's excellent new tool F-6D/K Mustang kit, which is highly detailed with engraved panel lines and comes with markings for six different USAAF P-51's from the ETO, CBI and PTO, plus the usual Photo etch metal parts and canopy/wheel mask. This is now regarded as the best Mustang kit ever in 1/48.
Write an online review and share your thoughts with other shoppers!