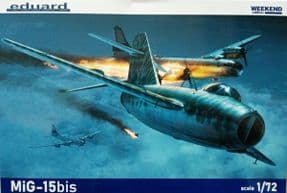 The Mig-15 was an early Russian jet fighter that used German swept wing technology combined with a British engine. Entering service in 1949, it was the best fighter at the time and during the Korean War it proved its superiority over everything but the US F-86 Sabre. The US Sabre pilots had better training and many of them were WW2 aces and when they got improved versions of the F-86, they gained the upper hand. The MiG-15 continued in service for many years and was used by 41 different countries and more than 12000 (18000 including licence built) were built, making it the most produced jet fighter in history.

Eduard are a Czech based manufacturer famed for their model accessories. They have in the last few years released a successful range of kits. This Weekend kit is the same plastic kit as the Profipack edition but without the extras. There are decals for 4 different aircraft, from China, Czechoslovakia, Egypt and the Soviet Union.