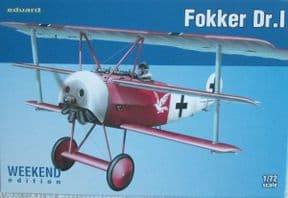 IN STOCK
WAS: £9.20
OUR PRICE:£7.86
The Fokker Dr.I Triplane (along with the Sopwith Camel) is probably the most famous WWI fighter. Entering service in late 1917, it proved highly agile with a good initial climb rate. However, the Dr.I suffered from a number of problems, in combat it was found most Allied fighters were faster and the Dr.I's performance fell away dramatically at higher altitudes. It also suffered from structural issues, some planes falling apart in mid-air and the pilot's view was poor for take off and landing. It was withdrawn from service in June/July 1918 when the superior Fokker D.VII entered service.
The Dr.I remains famous because it was the last plane flown by the legendry Red Baron, Manfred von Richthofen, who scored his last 19 victories before being killed in action in April 1918.
Eduard are a Czech based manufacturer famed for their model accessories but they have in the last few years released a successful range of kits. The Weekend Editions consist of the plastic parts from the Profipacks but without the extras. There are markings for 2 different German planes.
Write an online review and share your thoughts with other shoppers!