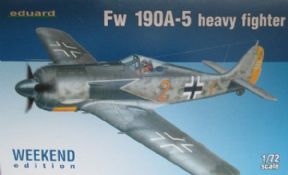 OUT OF STOCK
WAS: £11.20
OUR PRICE:£10.20
Sorry, this item is out of stock.
If you would like to order it, please email us with the product details above this message and the number you want. We will get back to you with a current price, shipping cost and likely delivery date.
Please also let us know if you´re outside the UK so we use the correct postage rates.

The Fw190 first went into service in the summer of 1941. It proved to be much better than the RAF's Spitfire Mk V and soon became known as the Butcher Bird. Early versions suffered from overheating problems, which weren't completely rectified until later models. The Jabo versions were fitted as fighter bombers and could carry 250kg or 500kg bombs under the fuselage. The A-5 was the first A series Fw190 with the small fuselage extension. It was heavily armed with two 7.92mm machine guns and four 20mm cannons, and in addition it could carry bombs, rockets and gun pods etc.
Eduard are a Czech based manufacturer famed for their model accessories. They have in the last few years released a successful range of kits. The Weekend editions contain the plastic kit with markings for 2 aircraft. This kit is made from injection moulded plastic and is now considered the best Fw190 kit in 1/72 by many modellers.