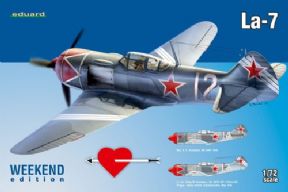 IN STOCK
WAS: £10.60
OUR PRICE:£7.30
The Lavochkin La-7 was one of the best Russian fighters of WW2 and easily capable of holding its own against the German Bf109 and Fw190. Development started with the failure of the LaGG-3. Lavochkin modified the LaGG-3 with a Shvetsov radial engine and cured it of its worst faults. The result was the Lavochkin La-5, which proved to be one of the first Russian fighters capable of taking on the Germans. The La-7 was further refined and had a more powerful engine than the La-5.

Many of the leading Russian air aces gained many of their victories in the La-7, most notably Ivan Kozhedub, who scored over 60 victories.
Eduard's weekend kits contain the same plastic parts as the profipacks but with only 2 marking options and no extra's. This kit as a bonus contains a set of self adhesive 'fabric effect' seatbelts.
SOME OTHER PRODUCTS YOU MAY LIKE