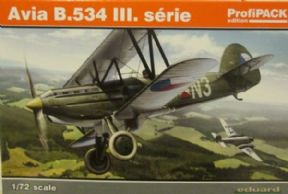 IN STOCK
WAS: £14.60
OUR PRICE:£8.70
The Avia B-354 was an agile bi-plane that first flew in 1935. At the time it was one of the best fighters in the world but it was soon outclassed by the likes of the Bf109, Hurricane and Spitfire. It was used during WW2 by the various Axis powers as a fighter and in other roles such as advanced trainer. It was also used against the Germans by the Bulgarians (after they changed sides) and during the Slovak uprising against the Germans. The German fighter pilots knew not to dogfight the more agile B-354.
This is Eduard's Avia B.534 1/72 Profipack kit and it looks very nice. The model features fine engraved panel lines and is very crisp and cleanly moulded. It comes with cockpit etch, canopy/wheel mask and decals for 4 planes from the Czech and Slovak Air Forces, plus the Luftwaffe.