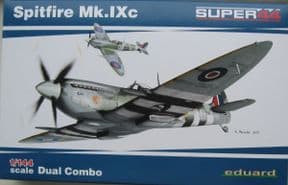 OUT OF STOCK
WAS: £12.80
OUR PRICE:£11.70
Sorry, this item is out of stock.
If you would like to order it, please email us with the product details above this message and the number you want. We will get back to you with a current price, shipping cost and likely delivery date.
Please also let us know if you´re outside the UK so we use the correct postage rates.

The Mk IX Spitfire was introduced in 1942 to counter the German Fw190 and was actually in production before the Mk VII and VIII. The Mk IX was successful enough to limit the numbers of the technically superior Mk VII and VIII's, as full scale conversion on the production lines would disrupt production of this very important fighter.

The Mk IX was essentially, a Mk Vc modified to take the 70 series Merlin engines, the most noticeable visual change being that of a new 4 bladed propellor, new exhausts and radiators under each wing. Later Mk IX's had a larger broad rudder and the 'e' wing, which was equipped with two 20mm cannons and two 12.7mm heavy machine guns. Some had the wings clipped and were optimised for low level and were known as the LF Mk IX.

Eduard are a Czech based manufacturer famed for the model accessories. They have in the last few years released a successful range of kits. The 1/144 scale kits are a new range and are crisp and cleanly moulded with a high level of detail for such a small scale. This is a double kit, meaning there are 2 kits in the box. There are 6 different marking options and the kits come with mask for the glazed areas.
Write an online review and share your thoughts with other shoppers!