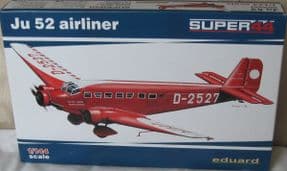 OUT OF STOCK
WAS: £13.99
OUR PRICE:£12.42
Sorry, this item is out of stock.
If you would like to order it, please email us with the product details above this message and the number you want. We will get back to you with a current price, shipping cost and likely delivery date.
Please also let us know if you´re outside the UK so we use the correct postage rates.

The Ju 52 was designed as a transport and passenger aircraft, first of all with a single engine and later with 3 engines. Pre WW2, its main user was Lufthansa although other airlines and indeed the Luftwaffe used it. The Luftwaffe used it as an interim bomber and it saw action in the Spanish Civil war in that role. It became more well known during WW2 as the Luftwaffe's main transport aircraft and was used to transport the Fallschirmjaeger (paratroops) to their targets during the Blitzkrieg and famously to attack the island of Crete.
The Ju 52 was so successful that it was never replaced by the Luftwaffe and was used by many operators post WW2  and was even in production in Spain from 1945-52!

Eduard are a Czech based manufacturer famed for the model accessories. They have in the last few years released a successful range of kits. The 1/144 scale kits are a new range and are crisp and cleanly moulded with a high level of detail for such a small scale.

This kit has marking options for 4 different airliners (1 Czech and 3 Lufthansa) and comes with mask for the glazed areas.
Write an online review and share your thoughts with other shoppers!