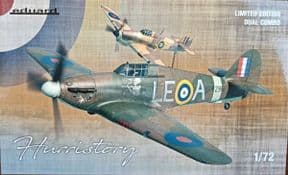 OUT OF STOCK
WAS: £29.99
OUR PRICE:£24.00
Sorry, this item is out of stock.
If you would like to order it, please email us with the product details above this message and the number you want. We will get back to you with a current price, shipping cost and likely delivery date.
Please also let us know if you´re outside the UK so we use the correct postage rates.

The early Hurricanes had a 2 bladed propeller and fabric covered wings but by the outbreak of WW2 they had 3 bladed constant speed propellers and metal skinned wings, allowing better overall performance and dive speeds. Although the Spitfire was the more advanced and faster of the RAF fighters during the Battle of Britain, the Hurricane was in service in much greater numbers and shot down around 60% of all enemy planes during the Battle. The more powerful Mk II Hurricane soon followed but by that time Spitfire production was up greatly and the Spitfire Mk II and V were still superior fighters than the Hurricane.

Eduard’s double Hurricane Mk.I kit contains 2 sets of plastic Hurricane Mk.I kits by Arma Hobby, which are the best Hurricane kits in 1/72. There are also 2 sets of Canopy/Wheel mask, Photo Etch metal parts and resin wheels and exhausts. The kit also comes with a large decal sheet for, 12 different RAF Hurricane Mk.I and Mk.I Trop’s.
Write an online review and share your thoughts with other shoppers!