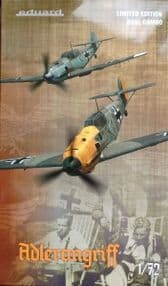 The Messerschmitt Bf109 is one of the most famous fighters in history. More Bf109's (over 33000) were built than any other fighter and it shot down many more opponents than any other fighter in history. The Bf109E introduced the DB601 inverted V-12 engine with direct fuel injection. This new version was vastly superior to the early Jumo powered 109's and was built in large numbers and by the time of the Battle of Britain in 1940, it was the Luftwaffe's main fighter. The E-1 was armed only with 4 machine guns but many were refitted to E-3 standard with 20mm cannons in the wings. The E-3 was the first Bf109 in service with the 20mm MG FF cannon in each wing and the E-4 introduced improved ammunition for the cannons.

This double kit features plastic parts from Special Hobby's excellent new Bf109E kit, which was developed with Eduard. This is a highly detailed injection moulded pair of plastic kits featuring a detailed cockpit and fine engraved panel lines. It is probably now the best Bf109E kit in 1/72.  Eduard have added their usual canopy/wheel mask sets, photo etch metal parts and a pair of resin main wheels for each aircraft. There are decals for 13 Luftwaffe Bf109E-1, E-3 and E-4's from the Battle of Britain.