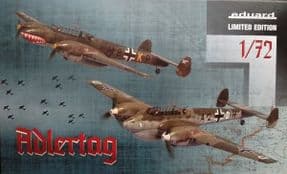 IN STOCK
WAS: £27.80
OUR PRICE:£21.00
The Messerschmitt Bf110 was designed as a 2 seat heavy fighter to act as an escort fighter and bomber destroyer. Although fairly fast and well armed it was clumsy compared to single engined, single seat fighters like the RAF's Spitfires and Hurricanes and proved easy meat for the RAF fighters. The Bf110 was used in other roles, such as fast bomber, ground attack and later as a Night Fighter. The C and D models were the main versions in use during the Battle of Britain and the C-6 replaced the 20mm cannons for a single 30mm cannon

Eduard are a Czech based manufacturer famed for their model accessories. They have in the last few years released a successful range of kits.
This Limited Edition kit has all the plastic parts, Canopy/Wheel masks and Colour Zoom etch set and a full colour instruction booklet that you would normally get a the Profipack edition but it also includes resin parts for the 30mm gun of the C-6 variant, plus decals for 12 different C and D model Luftwaffe Bf110s, as used in the Battle of Britain.
Write an online review and share your thoughts with other shoppers!