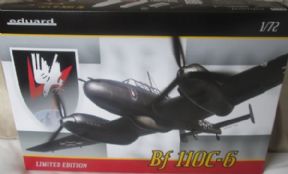 OUT OF STOCK
WAS: £28.80
OUR PRICE:£25.98
Sorry, this item is out of stock.
If you would like to order it, please email us with the product details above this message and the number you want. We will get back to you with a current price, shipping cost and likely delivery date.
Please also let us know if you´re outside the UK so we use the correct postage rates.

The Messerschmitt Bf110 was designed as a 2 seat heavy fighter to act as an escort fighter and bomber destroyer. Although fairly fast and well armed it was clumsy compared to single engined, single seat fighters like the RAF's Spitfires and Hurricanes and proved easy meat for the RAF fighters. The Bf110 was used in other roles, such as fast bomber, ground attack and later as a Night Fighter.
The C and D models were in service during the Battle of Britain, where it is proved vulnerable to single seat fighters. The C-6 model had it's 20mm cannons removed and replaced with a high velocity 30mm cannon in a gondola, underneath the fuselage.

Eduard are a Czech based manufacturer famed for their model accessories. They have in the last few years released a successful range of kits. The Profipacks contain a kit with several marking options, along with a Colour Zoom etch set, Canopy Mask and a full colour instruction booklet. This is Eduard's latest 1/72 kit and it looks like it should be one of the best Bf110 you can buy in 1/72. It certainly looks more accurate and finely detailed than the Airfix Bf110 kit.

This kit is based on Eduard's earlier Bf110C/D Profipack but adds resin parts for the 30mm cannon. There are markings for 2 different Bf110C-6's.