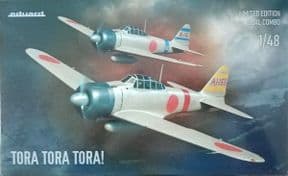 IN STOCK
WAS: £54.70
OUR PRICE:£46.50
The Mitsubishi A6M Zero or 'Zeke' was the Imperial Japanese Navy's main carrier fighter of WW2. At the start of the war in the Pacific in December 1941, it was the best carrier based fighter in the world and remained so until the Grumman F6F Hellcat entered squadron service in 1943. For its time it was fast, agile and well armed but lightly built and unarmoured, requiring only a few hits to bring it down. The Japanese failed to adequately update the Zero to keep pace with Allied fighters, and they also couldn't train enough pilots to a good standard to replace losses, so by 1944 it was hopelessly outclassed by US Navy and Royal Navy aircraft + crews.

This is Eduard’s New tool 1/48 kit of the Mitsubishi A6M2 Zero and it looks excellent. This is a double kit (2 kits in 1 box) and the set comes with etch metal parts and canopy masks for both kits. It also has decals for 12 different Zeros, used in the Pearl Harbour raid, 7 December 1941.