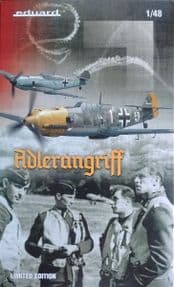 The Bf109E introduced the DB601 inverted V-12 engine with direct fuel injection. This new version was vastly superior to the early Jumo powered 109's and was built in large numbers and by the time of the Battle of Britain in 1940, it was the Luftwaffe's main fighter.

The E-3 was the first Bf109 to carry 20mm cannons in the wings. The E-4 had a new version of the MG FF cannons, that fired a more powerful explosive round, plus other small detail revisions

Eduard are a Czech based manufacturer famed for their model accessories. This set contains two Bf109E kits with optional photo etch metal and resin parts, plus canopy + wheel masks. There are decals for 13 different Bf109E-1/E-3 and E/4 from the Battle of Britain, including a couple of options for the Legendary ace Adolf Galland. There is also a bonus resin figure of Adolf Galland.