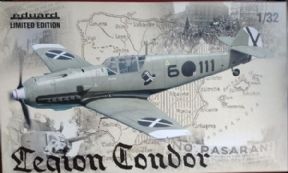 The Bf109E introduced the DB601 inverted V-12 engine with direct fuel injection. This new version was vastly superior to the early Jumo powered 109's and was built in large numbers and by the time of the Battle of Britain in 1940, it was the Luftwaffe's main fighter. The E-1 was armed only with 4 machine guns but many were refitted to E-3 standard with 20mm cannons in the wings. The Bf109E-4 followed on from the E-3, with minor modifications to the cannon ammunition, pilot armour and canopy. The E-7 was the first Bf109 to be fitted with drop tank provision and entered service in September 1940. Early Bf109E's first saw action as part of Condor Legion in the Spanish Civil War in 1938-9.

Eduard are a Czech based manufacturer famed for their model accessories. They have also released a successful range of kits. This kit contains finely detailed plastic parts, plus Eduard's famed canopy/wheel masks, colour photo etch metal parts and decals for 5 different Condor Legion Bf109E-1's and E-3's.