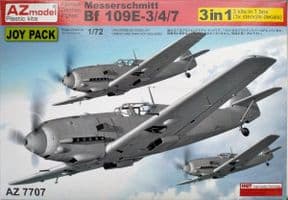 As with other AZ Joypacks it contains 3 detailed injection moulded plastics kits, with instructions but no decals. The idea being the modeller supplies their own decals and gets 3 kits much cheaper than buying them separately. This kit can be used to make Bf109E-3, E-4 and E-7 versions and comes with 'stencil' decals, which also include seatbelts and instrument panels.